This page contains profiles of the Big Sky residents, and will be updated periodically. Check them out below. 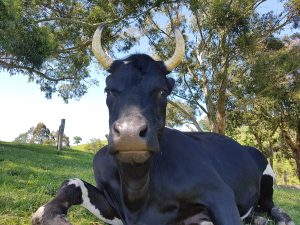 Raven will be four years old in January 2019. He is best friends with Suki and Dresden, who he was rescued and subsequently raised with here at Big Sky. Raven is a gentle giant whose scary looking horns do not reflect his placid, loving personality. A survivor of the dairy industry, he is a loved and valued member of the sanctuary family. 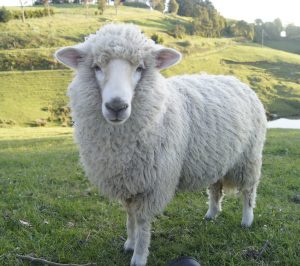 Pan was born out of lambing season, which perhaps was what saved her. The farmer called another sanctuary, with whom he had a relationship and said, “If you come get her now, you can have her.” She was just hours old. Luckily the farmer agreed to allow her to have some colostrum from her mum before he separated them. At the time, the other sanctuary was not in a position to raise a tiny lamb, as is often the case for overcrowded, under-resourced sanctuaries. They called us and we took her in. She was the tiniest lamb we had ever seen and she very quickly won our hearts. We raised her with the help of Nurse Bob-dog who, it seemed, loved her even more than we did. Pan is now a healthy happy adult member of the Big Sky flock with the woolliest face we’ve ever seen. 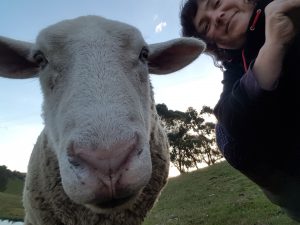 Addy was rescued from a paddock during the 2015 winter lambing season. Near death he was taken in by a wonderful foster carer who looked after him for those critical first few months. Eventually he came to Big Sky to live where he quickly set about making his presence known with the group of other young lambs we already had in care. He’s a bossy-boots and fiercely independent but always makes time to say hello when we are out in the paddock. Addy has a wonderfully cheeky personality and we just adore him. 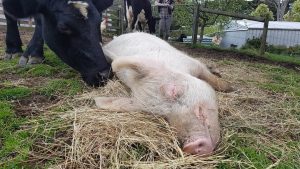 Roxy was rescued from a horrible place where she was thrown in a paddock on her own and forgotten about; unloved and starved near death. She spent the first three years of her life in this way and has now been at Big Sky for almost that long. She’s had her ups and downs with health problems, no doubt due to her terrible start to life. Nowadays, she is a happy-go-lucky, free spirit who prefers her own company, or that of humans, to the other pigs. Most days you’ll see her lazing about in bed and then out for her afternoon walk to the back paddocks, via the pool (the dam). Roxy is such a character and so much fun to hang out with. 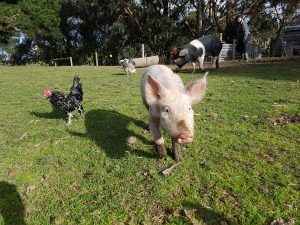 Oberon came to Big Sky in March 2017 after being rescued from an intensive pig farming operation. He was less than a week old. Originally a foster, the little cutie made a huge impression on everyone at the Sanctuary. Bob is a natural nurturer and took good care of Obi while he was living in the house. Obi’s energetic, friendly and bold personality has captivated all the pigs and provided some balance to the variety of pig personalities. When Obi transitioned out of the house, he quickly became best friends and paddock-pals with Petal, who has lived at Big Sky for two years. This has been a wonderful outcome for Petal as she’s found it difficult to make friends with the other pigs. Personality clashes occur amongst pigs, just as with groups of humans, and sadly the others always kept Petal on the outer. Obi and Petal are still best friends and share a shelter where they still snuggle up together at night.

Freddie was a part of a primary school hatching program, which many schools undertake, that aim to show children how a chick hatches from an egg. A seemingly innocuous activity, those chicks who turn out to be male are born into world that doesn’t want them, certainly not in the numbers in which they are bred. Freddie is one of the oldest and friendliest of the roosters and is often asking for chest pats. Freddie is also an ally of the humans and will tell off Shaun if he is in the area when Shaun launches a fly-kick attack.